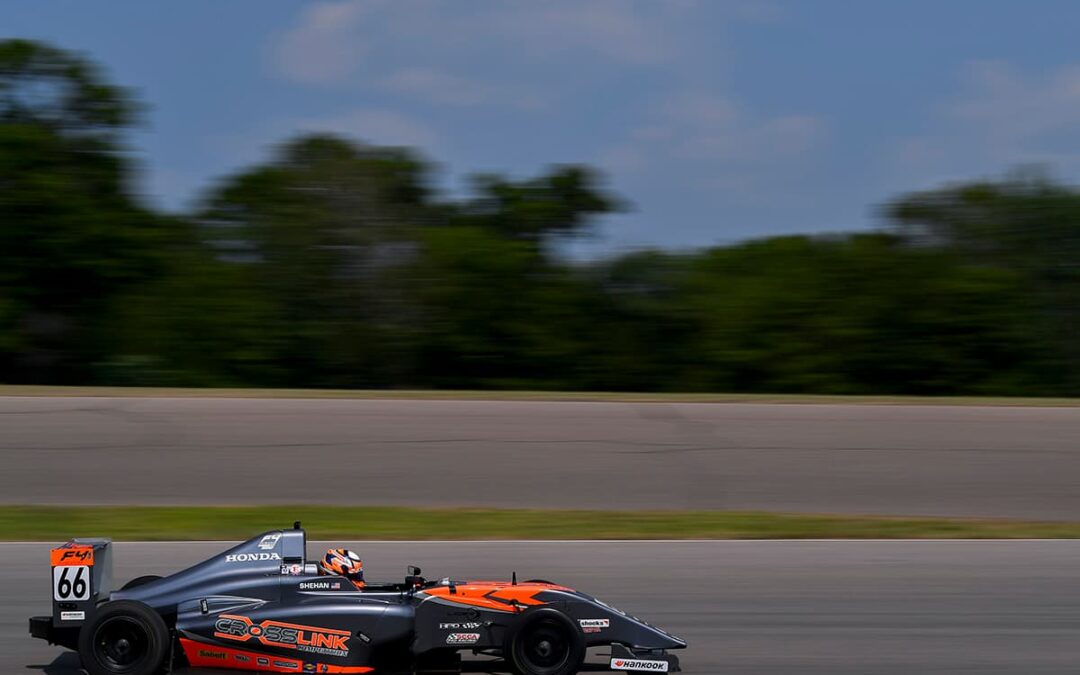 Heading to the Brainerd International Raceway in Brainerd, Minnesota, Team Crosslink’s Ryan Shehan was excited about competing at a yet to be seen racetrack. A new facility for the F4 United States Championship Powered by Honda program, Shehan, a rookie in the series, hoped that the lack of track knowledge and testing done at the northern state facility would level the playing field for all.

“Not many people knew much about Brainerd and that excited me to be honest,” explained Shehan. “We have competed at F4 staple facilities for the first three rounds including Road Atlanta, Road America and Mid-Ohio, and several teams and drivers have done countless laps there. Brainerd offered a clean slate for most, and that was something that could be an advantage as we entered the weekend.”

Getting up to speed during the promoter’s test sessions and two official practice sessions, Shehan and his #66 Team Crosslink prepared Ligier JSF4 turned the tenth fastest time in the final practice before qualifying. Looking to carry that momentum into the ever-important session, Shehan was caught up in some bad track position and eventually classified with the 22nd fastest lap time.

Shehan continued, “It was disappointing to be so far back but that also gave me motivation to go race and do what I do best.”

The first wheel-to-wheel action of the weekend saw Shehan line up in 22nd and immediately advance forward during the opening lap. After a long caution period and a restart, a few more positions were gained before another caution slowed the pace. Moving up eleven positions, the race was eventually checkered due to time constraints and officials deemed that no championship points would be awarded since drivers did not complete the minimum two green flag laps of racing. Additionally, with grids set on lap times from the first race, officials reverted to qualifying for race two, thus pushing Shehan back to another row eleven starting spot.

Race two on the weekend would roll off the grid Saturday afternoon and Shehan did exactly what he did in race one. Avoiding an opening lap incident to advance forward, the young Texan found himself just outside the top-ten with ten minutes remaining. Continuing his march towards the front, Ryan ran as high as seventh before finishing ninth, a season and career best for the rapidly improving youngster.

Starting the third and final race of the weekend inside the top-ten, Shehan had to again take evasive action to avoid two separate on track incidents. Falling down the running order to 23rd, the Team Crosslink driver had another spirited drive towards the front advancing all the way to P10 before finishing twelfth. Following the race, after protests and penalties were applied, Shehan was moved forward two positions to earn a tenth-place result and another championship point. It was his first double point scoring events weekend of 2021.

“It was a good end to the weekend and something that we can build upon,” addressed Shehan. “Another few points for us and steady improvement which is all that I have asked for this season. I am looking forward to some testing during the break before our next event at Virginia International Raceway (VIR) in September.”